Here we are again; the end of the month; and this time it's the shortest month of the year!  And I've been going well with my book-buying; only buying what I will definitely read.  This has been my New Year Promise to myself; to purchase books that I will read and review for you guys, then I'll definitely get through my massive collection within my lifetime!  And this month, I've been good and bought only two!  But they're wonderful and I took my time picking them out.
The first one that caught my eye was 'Towards The True Kinship of Faiths' by His Holiness The Dalai Lama.  I've always wanted to read something he's written and now I have bought this, I'm really looking forward to reading his words about how religions from all over the globe can somehow get along.

The second book I purchased is 'King Arthur: The Bloody Cup' by M.k. Hume.  It's a very thick book of '... the epic tale of Arthur, King of the Britons'.  I love reading Arthurian tales and books; so I'm definitely looking forward to reading this one too.
Both these books were purchased from QBD at Garden City off the discount tables; which I find always have a great array of books to choose from, whatever your taste in reading!  So, what did you purchase - and from where - this month?  Until next month's purchases, happy reading!
Posted by Mozette at 10:29 PM 2 comments:

Email ThisBlogThis!Share to TwitterShare to FacebookShare to Pinterest
Labels: 'In My Shelves' Monthly

When I visit people's homes, I notice a lot about the way they live; from the souvenirs they bring home from traveling around the place to the newspapers they read.  However, what I find the most revealing about the people I visit is what they read in their lives; yes, their bookshelves tell me a lot about them.
Yesterday, I visited my brother and his girlfriend for the day and both sides of the family were there to have a good time; eat, drink and be merry.  By the time the sun set, the place sounded like a nightclub and home-made pizza was being pulled out of the oven at a great rate!

Later on in the night, when we were all kicking back and we had settled after dinner, I checked out the bookcase in the lounge room.  Well, it had the usual amount of books I'd expect from my brother.  He loves motorcycles, cooking, music and gardening.  However, I found some great surprises in amongst it all when I stumbled upon a special edition of 'The Alchemist' by Paulo Coelho which was fully illustrated and hardcovered in its own special little folder.  What a find!  I had to borrow it as I hadn't read this book before and Katrina let me take it home. 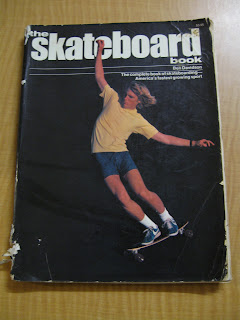 Gabe had a paperback edition of The Skateboard Book by Ben Davidson from 1978 where it shows you how to perform the tricks on your board, how to care for it, replace bearings in the wheels and and completely maintain the board; something you can't find nowadays in bookstores.  It's falling apart, but is still a useful tool in the skateboarding world; and one I hope my brother never gets rid of.  I've looked up this book on Bookfound and it's mainly located in the United States and is worth between $13.95 and $119.00; and they are willing to ship anywhere.  So, the book is still around, for any hard core skaters who want to get into caring for their boards in a big way.
I did enjoy looking through my brother's bookcase; as it's been a long time since I did.  It's an education when I look in on somebody's - anybody's - bookcase as I always learn something from it.  Whose bookcase have you looked at recently?  Have you learned something about them you didn't know?  If so, what is it?
Posted by Mozette at 10:39 AM No comments:

The Curious Case of Benjamin Button by F. Scott Fitzgerald

When Benjamin Button was brought into the world in the Summer of 1860, it completely shocked the Baltimore hospital staff to find that instead of him being a screaming tiny baby, he was a fully-grown man of seventy years of age.  Nobody was more shocked than his father, Roger Button, who tried to keep him a young boy.  As the years passed by, Benjamin found that he no longer needed the walking cane or eye glasses; his hair started to grow thick as well and he came to look very much like his father as he learned the family business and found himself a wife and they had a son.
However, socially, he was pushed away from educational endeavours such as Yale university as they thought he was being cocky and an idiot when he told them his age and he looked much older.  Yet, when he went in at what was considered the right age, he was accepted, but for him it was too late, Benjamin was becoming too young for the university courses; as his mind and body continued to age backwards towards youth.


I totally enjoyed reading this partially narrated short story of F. Scott Fitzgerald; as I have loved a lot of his works.  This being a part of a collection of stories, have yet to read the rest of the book, but I have always wanted to read this particular one; as it was turned into a movie with Brad Pitt in it (one I have yet to see; but only missed because I like to read the book/story first).
F.Scott Fitzgerald was born in 1896 in St Paul, Minnesota and went to Princeton University, which he left in 1917 to join the army.  He was said to have epitomized the Jazz Age, which he himself defined as 'a generation grown up to find all Gods dead, all wars fought , all faiths in man shaken'.  In 1920, he married Zelda Sayre and their traumatic marriage  and her subsequent breakdowns became the leading influence on his writing.  Amongst his publications were five novels This Side of Paradise, The Great Gatsby, The Beautiful and the Damned, Tender is the Night and The Last Tycoon (his last unfinished work); six volumes of short stories and The Crack Up, a selection of autobiographical pieces.
Fitzgerald died suddenly in 1940.  After his death The New York Times said of him that 'He was better than he knew, for in fact and in literary sense he invented a "generation"... he might have interpreted and even guided them, as in their middle years they saw a different and nobler freedom threatened with destruction.'
Posted by Mozette at 12:25 PM 1 comment:

Millicent is a highly-trained cat who works for the CIA (Cat Intelligent Agency) and has been sent on a mission by her boss - Tom - in Canberra to investigate and infiltrate the growing drug problem in the Northern Rivers area of New South Wales in the town of Nimbin.  While there, Millicent meets King - a very dashing and mysterious Burmese; a character in himself.  But is he a distraction, or is he in on the operations?  Her assignment becomes extremely dangerous when the investigation takes a cat-astrophic turn and unexpectedly leads her into intrigue and murder.  For Millicent, the somewhat quiet inland town of free love was beginning to turn into something she didn't expect; especially when another attractive ginger Tom shows up on the scene to help with the investigation... someone she has never heard of from inside the CIA.
I've had a great time reading this book.  From the very beginning I began laughing my way through; on the second paragraph of the introduction actually, and the adventures don't stop there.  Whether you enjoy cats or animal stories, this is a must-read for anyone who has had these interesting and humourous animals in their lives at some point or another.  And being a person who is horribly allergic, I've enjoyed the company of quite a few cats with the problematic reactions that go with them.
Bryon Williams is an ex-actor, script writer, stage and television producer and director, and recently turned novelist, is settled in the beautiful Gold Coast of Queensland, Australia.
His previous novels 'Grumpy Old Withered of Oz' and 'The Twilight Escort Agency' were published in 2009 and enjoyed by a very successful launch and reader response.  His next two novels 'The Tourist From the Light' and 'The Burning Boy' are to be published in the near future.
Posted by Mozette at 1:34 PM No comments: