Happy Birthday to the King of Horror! 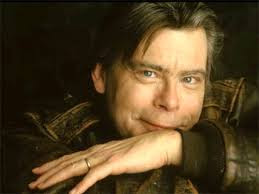 Today, I'd like to say a big Happy Birthday to the King of Horror: Stephen King.  This man has written some of the creepiest and bloodiest books that's ever hit the bookshelves around the world; making Maine, USA the centre of horror.
I remember the first time I tried to get my parents to allow me to read a Stephen King book.  It was 'Christine' and my older brother owned it.  Instead of sneaking around and reading it behind their backs (they would have found out about it), I got a smutty romance novel off one of my friends at school and began reading that.  Now, I've never liked romance novels, and was willing enough to read something I had absolutely no interest in to get my folks to let me read horror.  And, you know, it worked!  My Mum took the romance book off me and let me borrow my brother's copy of 'Christine'.  Sure it kept me awake for weeks afterwards, but it was worthwhile reading as I became the biggest Stephen King fan in my house.  I now own about 15 books of his in three languages (English, French and German); from 'Carrie' and 'Christine' to 'Salem's Lot', 'The Dead Zone', 'The Stand', 'Night Shift', 'On Writing' to more recent works such as 'Cell' and 'Under The Dome'
The most wonderful thing is that this writer has had a brilliant effect on me as a writer as I grew into the craft.  I have read his biography and gotten into more books that are just as well-written as his; and in recent years, I have been unable to read anything that has too many adverbs.  I've also become my own worst critic and am always editing my own works over and over before I'm anywhere near happy with it.
So, for being a wonderful writer and inspiration to not just me - but others around the world - Happy Birthday, Stephen King.  Without your work, the world would be a less creepy place; and we'd have less-challenging books to read.  Keep them coming.
Posted by Mozette at 3:49 PM