LifeLine Bookfest 2011! It's Still On... dates have changed. 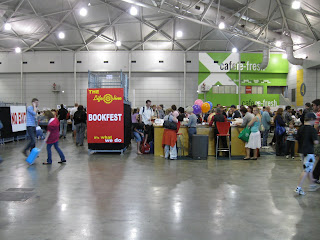 Yes, you read right! The Lifeline Bookfest is on again at the Brisbane Convention Centre.  The date it begins is 15th, January at 8:30am and the admission is FREE!
Now, for those who can't - or don't like to - go to this one, there's one in June as well!  How good is that?  All money raised from the biggest book sale in the universe goes to the less fortunate... so if you live in Brisbane (or the surrounding areas), make tracks to this wonderful event of books, books and more books!
You can train it in or bus it in.  I catch a bus from Logan and get off in front of the Museum (not at Southbank).  The MC is a man dressed looking like a safari hunter from the 1940's and he has got the most lovely speaking voice... so if you have little kids with you and they get lost, he's the guy to go to.
There's coffee outlets outside for you to keep up your caffeine levels and plenty of seating all around the place for you when you've finished your big spend-up at this wonderful book sale.
And remember:  if you can't make it this time - or can't find what you're looking for - there is another in June.  That's the one I usually hit because it's a cooler time of the year and I find it easier to get around in my Docs.

Edit:  Due to the flood crisis in Brisbane City, I'm not sure if the this book fair is going ahead.  I have posted on Lifeline's Facebook; but there has been no response and I have tried calling them but have only received a recorded message.  But I do know that the West End district of Brisbane City - which is where the Convention Centre, where this event is held, has been evacuated as of yesterday or the day before.

I have seen adverts on the television tonight that the Book Fest is going ahead.  It is being held between the dates of 29th, January - 6th, February.  Let's hope it's a success!
Posted by Mozette at 2:49 PM

Email ThisBlogThis!Share to TwitterShare to FacebookShare to Pinterest
Labels: Events