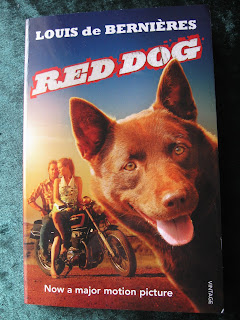 Going by the name Red Dog, this lovely Kelpi captured the hearts of anyone he met in the late 1970's while he lived in Dampier, Mt Tom Price and around Western Australia.  The stories which were gathered about this famous dog are true, brilliantly told and hilariously funny; and yet will touch your heart as you are taken along the life of Red Dog.  Even though he never says a single word during this book - and his human friends do all his talking for him - this account of this wonderful dog's life also gives you glimpse of the true Australian outback; its glaring heat, the desert and how truly hot and dreadful it can be.
Being an Australian, I can really connect with the characters of this book; especially seeing I've owned a dog as well.  However, my family never owned a dog quite like Red Dog.  This dog was most certainly a one of a kind.  Now, I think all us dog-owners can relate to the fart-in-the-car experience from our dogs, or the looks they give us when they're trying to tell us they didn't do anything wrong (when the exact opposite is the truth).  However, Red Dog was truly a friend to all in the vastness that is Western Australia; nobody truly owned him, he owned the land and its people.  He enjoyed life completely and - like they say - Red Dog enjoyed a dog's life.


Louis de Bernieres was born in London in 1954. After graduating in Philosophy from the Victoria University of Manchester, he took a postgraduate certificate in Education at Leicester Polytechnic and passed his MA, with distinction, at the University of London.
De Bernières’ first novel, The War of Don Emmanuel’s Nether Parts, was published in 1990 and won the Commonwealth Writers Prize, Best First Book Eurasia Region in 1991.
Posted by Mozette at 10:09 AM