Today, Ruth Park passed away aged 93.  Born in New Zealand in 1917, Ruth Park moved to Sydney in 1942 to work in a newspaper where she met and married her husband.  They had five children and struggled to live as freelance writers.
Her first book, Harp In the South was unpublished, but won her 2,000 pounds in the Sydney Morning Herald literary competition.  The book shocked readers and caused scandal as the public read about the Irish family in the slums of Surrey Hills in Sydney and their way of life amongst the poverty, adolescent sex, wife beating and murder.  Angus & Roberston published Harp In the South as part of the Park's Prize in the UK and it was translated in 37 languages. 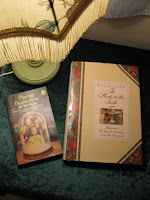 Ruth Park wrote other books including Poor Man's Orange, Swords and Crowns and Rings which won the Miles Franklin Award in 1977.  She also wrote Playing Beatie Bow and The Muddleheaded Wombat (based on her long-running radio serial); along with two dozen childrens books.
Most of her books remain in print and she was pleased to remove the hyphen from the Muddle-headed Wombat for the 2010 edition of the book which contains an essay that was her last piece of writing.

Apart from stints in London and Norfolk Island and visits to New Zealand, Ruth Park mainly lived in Sydney in a Mosman apartment with harbour views.  She was known as one of the greatest Australian writers who made the biggest impact on literature in this country; along with Thea Astley and legendary Beatrice Davis.  Now all of them are gone into the history books of the written word.
Posted by Mozette at 9:42 PM