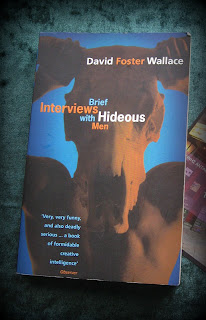 David Foster Wallace is a brilliant writer whose life was cut tragically short.  And his work wasn't discovered by me until recently when I found myself reading more book review blogs such as The New Dork Book Reviewer.  When Greg mentioned some of DFW's titles there, I just had to get in and read some of his work.
So, while I was cruising around on Bookcrossing one day, I found a bookray for 'Brief Interviews With Hideous Men' and put my name down for it.  A year or so passed and I received an e-mail from a Bookcrosser in South Africa saying she was almost finished with this very book.  I was so excited about it!  However, when I received it and began reading the short stories, my excitement waned a little.  I did enjoy the language, but the stories were long, complex and didn't hold my attention.  They were also about mainly - well - nothing really.  DFW had stories in this book about everyday conversations in airports, bars, restaurants and a couple of sordid stories titled after the title of the book which completely confused me.
So, I don't really know what to make of this book.  It is a book of short stories; however none of them really make any sense.  I can't see anything about the characters.  He didn't make me care about any of them, there wasn't really any storyline or real use to them, so I didn't see much point in why he had them in the book; even though they were eloquently and so gorgeously written, they were also very hard to follow.  Most of his extremely long sentences made absolutely no sense at all.
David Foster Wallace must have written better books than this one; so I will look out for them and read them.  However, this one was not one that I would recommend for your reading pile, unless - of course - you like complex stories like his.  Until my next post, happy reading.
Posted by Mozette at 9:38 PM

Email ThisBlogThis!Share to TwitterShare to FacebookShare to Pinterest
Labels: Challenges, Short Stories, The Summer of Fun 2011