'Christian Slater Back From the Edge' by Nigel Goodall 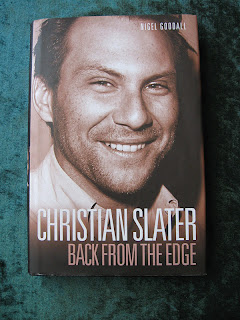 Born into a stage and movie family, Christian Slater had acting in his blood from the very beginning of his life.  His parents met at an acting school in New York City and - after a quick courtship - married and had Christian in 1969.  His life growing up wasn't like most kids, as he was often in the wings of theatres and in dressing rooms watching his father get ready for performances.  His mother - Mary Jo Slater - became a casting agent and she helped him with his roles in some of his movies; however she didn't like most of his choices.
This book is a very informative, detailed account of Christian Slater's life.  It's the good, the bad and the ugly sides of his personal and movie lives which nobody else had written; and I'm glad it was written by Nigel Goodall.  There's some great photos of Christian in the book and it's so easy to read you can get through over thirty pages in one sitting easily.
However, this book is also out of print and can only be found in the UK in the hard cover format.  I had to order my copy through The American Bookstore here in Brisbane and wait for it to arrive three weeks later.  Otherwise, if you can get your hands on a copy of this book, it is well worth a read.
Posted by Mozette at 10:38 AM

Email ThisBlogThis!Share to TwitterShare to FacebookShare to Pinterest
Labels: Autobiography/biography, Rare and Out of Print, The Summer of Fun 2011